Tennis Stars – What Do They Eat? 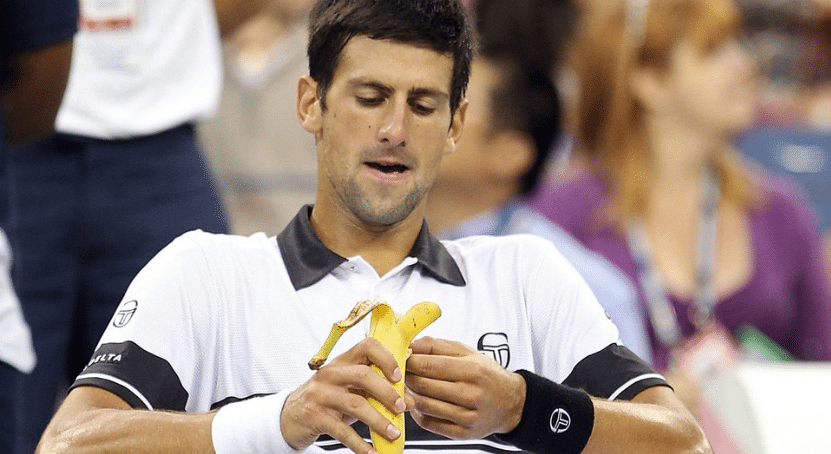 Have you ever wondered what tennis players eat that allows them to push their bodies to the absolute limits for such extended periods of time?

With the Australian Open (AO) finals coming up, we have a good idea of what the players are serving on the court – but what are they serving off it?

Professional elite tennis is a high intensity sport with performance nutrition playing an important role. Matches are played over a number of sets (usually 3 or 5) with games lasting up to 3 hours for women and 4-5 hours for men. Breaks are short with players receiving less than a minute between points, 90 seconds for change of ends and only 2 minutes between sets.

If you’ve been watching the AO this year, you would’ve seen the athletes darting across the court. These repeated short bursts of high intensity running can impact the athlete’s stored carbohydrates. This becomes problematic during a tournament like the AO where athletes may play multiple games a day or over several days with little time to replenish their stores.

Another thing to consider is the heat! Hydration is important, especially when players are playing for extended periods of time with little breaks to properly hydrate.

In the lead up to the AO and between matches, it’s important athletes up their energy and carbohydrates. Carbohydrates are essential for providing adequate fuel for both performance and recovery (replenishing stores). Lean proteins (i.e. tuna, chicken, lean cuts of meat) for muscle recovery and fruits, vegetables, nuts, seeds and wholegrains for protection and recovery are other important components.

It’s likely you’ll find athletes regularly sipping on fluids with a bottle at the ready! This is because dehydration can negatively impact performance, skill and decision making. Warm weather means increased sweat and higher risk of this. Athletes during these days will be drinking more to replace sweat losses.

Before a match – fuel

Before a match (~3-4 hours) athletes will be having a carbohydrate rich meal with a small amount of protein and fluids. These carbohydrates will keep a steady energy store to power through the matches later on. Protein is a good compliment to the meal, however is more necessary after the match. This may be a chicken and salad sandwich, spaghetti bolognese or muesli with fruit. They may also top up with small snacks such as yoghurt, fruit or a handful of nuts.

During a match – Hydrate

Hydration is key to replace fluids and prevent dehydration. Ball-kids are often at the ready with fluids and a towel to ensure hydration is always available. During the match, so much energy is used that glycogen stores (i.e. stored carbs) are depleted. Therefore it is important to replenish these stores.

For athletes who don’t like to eat during a match, they’ll often rely on gels, shot bloks, gummies and sports drinks. Other athletes might go for a more conventional option and eat a little snack such as an energy bar, dried fruit or a piece of fruit like a banana. These can enhance performance and delay the onset of fatigue.

During tournaments like AO, it’s important for athletes to begin recovery nutrition as soon as possible post-match, as the next game is often not far away. So much energy has been expended so the key here is to refuel their bodies. Snacks should contain carbohydrates for fuel, protein for muscle repair and recovery and plenty of fluids to replenish losses. Fruit and vegetables are also important for their antioxidant properties to prevent illness from over-exertion.

Some examples include egg salad sandwich, flavoured milk and a handful of nuts, chicken salad & avocado wrap or spaghetti bolognese with a side salad.

What do the stars eat before their games?