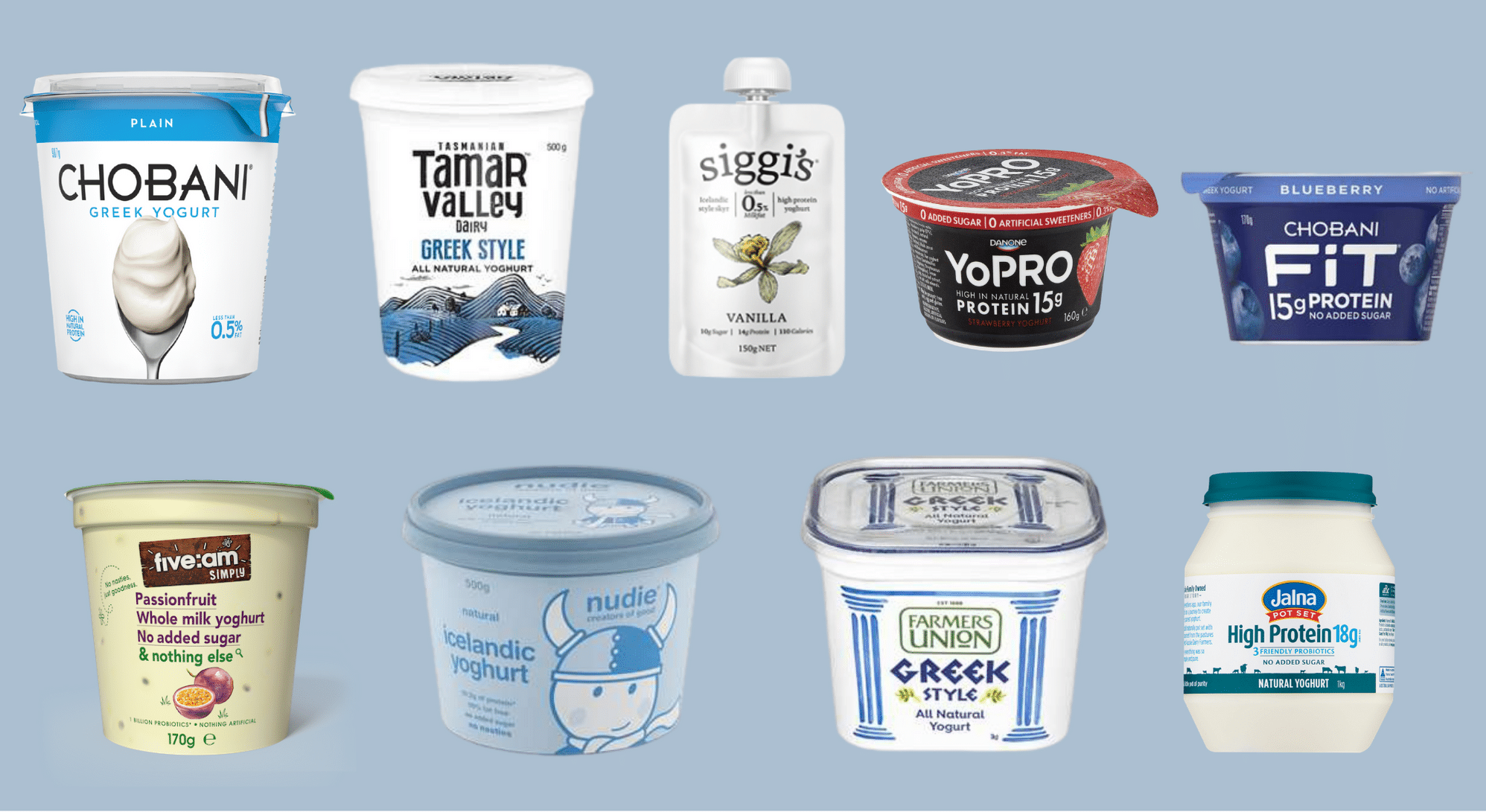 We often get asked whether yoghurt is a healthy choice and what the healthiest yoghurt is.

If you’ve seen our Instagram feed, you’ll know we are big fans of yoghurt for breakfast or as a healthy snack when the 3pm munchies strike. This is because yoghurt is naturally rich in calcium, which is essential for strong bones and teeth, is a great source of protein and contains probiotics.

However with the ever increasing number of yoghurts available, it’s important you know what to look for and how to make the best choice for your health.

Here’s 5 things to keep in mind when choosing a yoghurt.

Choosing a plain yoghurt means you usually don’t have to worry about any sneaky added sugars in the yoghurt. When you look at the nutrition information panel on a plain yoghurt, the sugar you see is simply a sugar called lactose that is naturally present in dairy foods (and FYI this is a natural sugar not an added sugar).

If you don’t like the taste of plain yoghurt, try mixing through some fresh or frozen fruit to naturally sweeten it. You could also try adding a handful of crushed nuts or seeds to give it some flavour. These days there are also some healthy flavoured yoghurt options that have no added sugars.

Greek yoghurt is generally considered the most nutritious option when it comes to yoghurts. Due to the way it is made, it is naturally higher in protein, which makes it a great addition to breakfast, leaving you feeling satisfied throughout the morning.

In terms of Greek style yoghurt, this is not strained the same way Greek yoghurt is and hence doesn’t contain as much protein. Greek style yoghurts often contain thickeners such as cream, milk solids, gelatine and gums to give it a creamier texture. We recommend going for the real deal instead!

3. Look out for probiotics

Probiotics are the living beneficial bacteria in the gut. There are many different species of probiotics and the health benefits of probiotics are unique to the specific strain. For example the well researched Lactobacillus rhamnosus GG (known as LGG) has been shown to have positive health effects on the digestive system.

Traditional bacterial strains used to make yoghurt are Streptococcus thermophilus and Lactobacillus delbrueckii subspecies bulgaricus. In addition to these, some yoghurts also contain added probiotics, the most common species being Lactobacillus and Bifidobacterium.

Ideally we recommend choosing a yoghurt with more than one species of probiotics. Probiotic doses are measured in CFUs (colony forming units). To make sure you’re consuming enough probiotics, go for a yoghurt that contains at least 10^8 CFU per serve.

The fat content of dairy foods, specifically yoghurt is an interesting consideration. Reduced fat and diet yoghurts have long been a popular option and dominated parts of the yoghurt aisle.

New research has shown that for otherwise healthy people (that’s people without heart disease or diabetes), full fat dairy is A OK in the context of a healthy diet. Fat is satiating. Fat is what makes yoghurt deliciously creamy and to achieve this effect in a diet yoghurt, additives are often added like emulsifiers and gelatin.

While coconut yoghurt might be a good option for vegans or people with milk allergies or intolerances as it is dairy free, unfortunately it doesn’t stack up too well nutritionally. Coconut yoghurt is a high-kilojoule, high saturated fat choice and it is lower in protein, calcium and doesn’t naturally contain probiotics. Check out our comparison here if you’re not convinced! 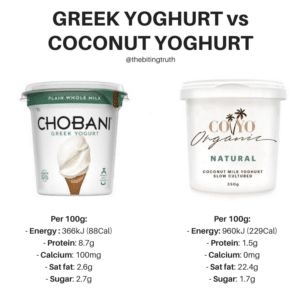 Our top yoghurt recommendations (based on nutrition and taste of course!)